My take on feeding the world


A few months ago I was interviewed by Story Preservation Initiative. What started out as a nice interview about What A Plant Knows, developed into a discussion about global food security and the role of genetic engineering in agriculture. The interview was edited into a monologue of over an hour, which you can access here. Below is the part pertaining to feeding the world.

I’ve found myself in many bizarre situations. None though perhaps surpasses what I did last week. I hawked Tel Aviv University programs at an Indian trade-fair aimed at the food industry.

I was the guest of the Confederation of Indian Industries trade show called FOODPRO 2015. I have been interacting with CII for almost two years as co-chair of the India-Israel Forum sub-group on Food Security. I was one of the guest speakers for the conference part of the event. That in itself is not so bizarre – I’ve given talks over the years to diverse audiences. But what was bizarre is that they asked us also to man a booth in the exhibition part of the trade-show. So one of the 250 exhibitors at Chennai’s FOODPRO 2015 was the Manna Program for Food Safety and Security at Tel Aviv University. At both #35, we handed out flyers about our summer program and sang the praises of Tel Aviv University. To our right in booth #36 was CoCo Rain – “100% pure tender coconut water”. To our left in booth # 34 was Chennai Food Testing, a chemical service lab. Across the aisle in booth 112, Kookmate had a large exhibit of industrial cooking machines including an automatic chipati maker. Other booths included spice grinders, chicken pluckers, and sweet coffee machines. Booth H43-A belonged to "Spanker International". We didn't spend much time there.


Obviously, Maya Oren, the Program Director at Manna, in her sleeveless back dress, and me with light brown hair, and our promoting an advanced educational program, stood out among the sari-clad women and tika-adorned men selling ice cream machines, rice makers and automatic mixers. Our stall was frequented by an endless stream of curious visitors, most long past university age, who eagerly snapped pictures (especially of Maya), took home TAU leaflets, and especially, our keyfobs. Many of the conversations bordered on the absurd – “In which part of India Tel Aviv is?”, “What are you selling?”, “Are you interested in puffballs?”. It was like touring around India, while staying in one place. We quickly adopted the head bob, which we found made us more understood. 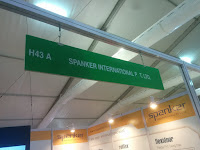 Without a doubt, most of our time was spent more in promoting Israel awareness than in attracting students. But we also met a group of motivated college students studying entrepreneurship who surrounded us, excited about the possibility of studying in the “start-up” nation. They were at the fair as part of a class on agro innovation. And we met a number of industrialists, who found in Tel Aviv University a novel option to the American universities they had been considering for their children. And we bought spices – 8 different types of curry for $5. I thought of taking home a chipati maker, but it wouldn’t fit in my suitcase.