The Wollemi Pine is a majestic conifer that grows up to 40 metres high in the wild in a very specific area in Australia, with a trunk diameter of over one meter.The oldest known fossil of a Wollemi Pine  dates back 90 million years, though the Pines may have have been around since the Jurassic period 200 million years ago. It was presumed extinct for around two million years. However in 1994 a few living Wollemi Pines were discovered by a bushwalker in the Wollemi National Park just outside Australia's largest city, Sydney. Dubbed the botanical find of the century, the Wollemi Pine is now the focus of extensive research. Less than 100 adult trees remain in the wild and only a select few researchers are permitted to see the Wollemi Pine in it natural habitat. However, not to despair! Members of the public can view propagated plants at a number of botanical gardens around the world.
1 comment:

Revenge in a name - Sigesbeckia orientalis

Carl Linnaeus is often called the Father of Taxonomy. While the crtieria he used for taxonomy have largely been replaced, the hierarchical classification and custom of binomial nomenclature that he established remains.


While many criteria went into determining the binomial name of a plant, at least in one case, revenge was the main criteria. When Linnaeus announces his discovery that plants produce contain male and female organs and reproduce sexually, some of his contempories responded with shock and contempt. One of them Johann Siegesbeck called his idea "loathsome harlotry" and wondered "who would have thought that bluebells, lillies and onions could be up to such immorality?"  Linnaeus got even by naming St. Paul's wort, an ugly, foul-smelling weed that grows in the mud, Sigesbeckia orientalis.
7 comments:

Are you a botanist or a biologist?

Probably the worst question I was asked during my recent book tour was, "So are you a biologist or a botanist?"

Just to confirm, the Merriam-Webster Disctionary defines as follows:
bot·a·ny: a branch of biology dealing with plant life

This question would be really funny if it weren't for the underlying tone that botany is distinct from biology. Unfortunately many a plant scientist (or botanist) can attest that at many major universities, botany is considered secondary to "real science", which is often defined as human genetics or neurobiology. This is is seen in the distribution of financial resources and in the diminished part of plant biology in undergraduate biology curricula. I've personally witnessed academic discussion where plants were considered irrelevant for the study of circadian rhythms or basic developmental biology.

Among the public this misconception of "botanist" is also prevalent. Ask yourself, what do you picture when you hear the term "botanist" or "plant biologist"? If you don't picture a scientist in a modern lab researching basic questions essential for human survival, than we as botanists have done a very bad job at projecting who we are and what we do.

Email ThisBlogThis!Share to TwitterShare to FacebookShare to Pinterest
Labels: commentary

Linda Leaming lives in paradise. Her book MARRIED TO BHUTAN is the story of her life in one of the most magical and beautiful places on earth, the Himalayan Kingdom of Bhutan.

I never feel more happy or alive than when I'm walking in the mountains of Bhutan. One of my favorite walks is to WangdueTse (Wang-d-SAY), a famous, old temple on the outskirts of Thimphu with giant iron statues and an ancient mud floor. It takes half a day from my house in the hills above the city, and it's a marvelous escape into another world. The hike takes me down the big hill where we live, around the bend and then up the switchback road to Sangaygang (San-GAY-gang). At Sangaygang, high above the city, I walk past the caretaker's cottage and note his nice garden, and then it's over a big mound and I'm in the woods headed to the temple.

Surrounded by the forest, there's that insular, rich aroma of nature and life. Rotting plants, pine sap, urine, fresh air, flowers, and wood smoke, all blend together, and it's the smell I love most. One plant, called khempa by the Bhutanese, is gloriously making itself known on the edge of the trail this spring morning. It has a sort of pungent, musky, eucalyptus smell and is used liberally here as a medicinal plant. A spoonful of the juice helps with sinusitis, and a hot bath with an armful of its leaves will cure back pain. Bhutan in the Himalayas is the land of medicinal plants. There are over of them 500 cataloged, and many as yet unrecorded. In Thimphu we live near the Traditional Hospital, which uses many traditional herbs and plants for healing. Here's a blog post I wrote about going to the traditional hospital.

Who's afraid of "superweeds"?

A recent post in The Atlantic decries that appearance of RoundUp-resistant weeds popping up in fields of GM crops, and uses this a call for the abandonment of GM technology.

The only problem in his thinking is that "superweeds" started popping up way before the advent of GM technology and the deployment of RoundUp-resistant crops. For example, atrazine was one of the most widely used herbicides in eradicating plant growth on road shoulders, and is still widely used in agriculture. Weeds resistant to atrazine started to be noticed in the 1970s. My Ph.D. adviser Joseph Hirschberg isolated the first gene for herbicide resistance in 1983 from an atrazine-resistant Amarnthus hybridus that had been isolated from the side of a highway. This was way before any GM crops had been developed.

So as long as herbicides will be used in modern agriculture, there will always be the problem of spontaneous resistance, just as as long as we use antibiotics, antibiotic-resistant bacteria will also crop up.  GM technology is not the cause of the resistance. The challenge is in designing the best use of herbicides to ensure the best agricultural yields for the farmers, while protecting our environment as best as possible.But that's the subject of another blog.
3 comments: 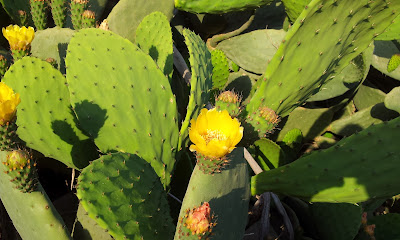 As a new immigrant, I can now proudly declare myself a tzabar !
6 comments:

The genes of Arabidopsis

Arabidopsis has a very short life cycle, less than two months, is small, and each plant yields hundreds of not thousands of seeds. These three characteristics, coupled with the evolutionary quirk that arabidopsis has relatively a small amount of DNA, has made it the most studied plant in the world.

While Arabidopsis has almost the same number of genes (~25,000, but this is open to debate) as found in most plants and animals, it contains very little of a type of DNA that’s called "non-coding DNA" which made determining its sequence relatively easy to do. To put things in perspective, while Arabidopsis contains about 25,000 genes in 120 million nucleotides (the building blocks of DNA), wheat has the same number of genes in 16 billion nucleotides, and human beings have about 22,000 genes, less than the petite Arabidopsis, and in 2.9 billion nucleotides.  These numbers should be taken with a grain of salt as the precise definition of “gene” is evolving and with it the numbers. But the general trends and scales are correct.  Almost all of the genes found in Arabidopsis are also present in plants that are important agriculturally and economically, such as cotton and potato and poplar trees.