The rarest plant on Earth

Wood's cycad is easily the rarest plant on Earth.  Only one plant was ever found in a small area of Ngoya Forest in South Africa in 1895 by John Wood (hence the name). Parts of this plant were removed and propagated by rooting and all specimens of Encephalartos woodii in different botanical gardens around the world are actually continuations of this one original tree. The original specimen was reomved from the wild in 1916, and died in 1964. As this tree was male, all of its clones are also male.
No comments: 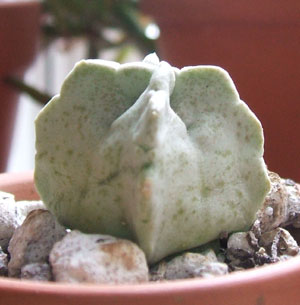 Danny: This succulent is so rare that is has been basically unstudied by scientists. Over the past century there are only a handful of publications on Whitesloanea crassa. Most recently was a phylogenetic study published in 2000 that showed that Whitesloanea crassa is related to two other African succulents, Duvalia and Huernia.
3 comments:

If you drink two cups of coffee a day, then somewhere in the world there are 15 coffee trees growing just to supply your annual fix! Ok, so that you learned last month in my blog about the Arabica coffee tree. Coffee from the the Robusta coffee tree  is often considered lower quality than coffee from other species and so is used primarily in cheaper blends and in instant coffee. The upside of robusta coffee is that it has twice the caffeine of Arabica used in higher quality coffee! So you get more pop for the buck!
No comments:

The Calabash tree is found in tropical jungles of Central and South America. This tree produces a huge fruit that resembles (and weighs like) a cannonball. When fresh, the fruit is eaten. When dried and smoked, the fruit covering is used by native peoples as a container for food and liquids, as a cup, as a ladle, and even as a musical instrument (called the maraca). The fruit seeds contain an oil that's used as a medicine against colds.
No comments:

The Pelican flower plant makes huge heart-shaped flowers which are over a foot long. But the gargantuan size also comes with a gargantuan smell that's been compared to the smell of a dead rodent. Native to Central America, this vine is a favorite of botanical gardens.
No comments:

Email ThisBlogThis!Share to TwitterShare to FacebookShare to Pinterest
Labels: flower

I want to use The Daily Plant today to talk about the workshop that I organized last week entitled "Food Security in the 21st Century: Agricultural, health, economic, judicial and political perspectives". 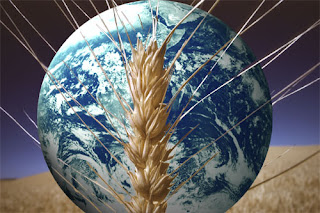 Ensuring a constant supply of nutritious food for the world is probably the largest and most important challenge for the 21st century. Most models have the world's population topping out at 9 billion by 2050. This is three times the population when I was born, and almost nine times that from when my grandparents were born. This enormous increase in population then of course urbanizes land once used for agriculture, and puts enormous strains on our already endangered sources of fresh water.

So how can we provide more food for the world, with less land, less water and less fertilizer?

Lets look at some statistics.  According to the different presentations at the workshop, over 1 billion people, primarily in Africa, suffer from food deficiencies. Another 3 billion have enough food in terms of volume, but sufferer from nutrient deficiencies such as lack of vitamin A, iron, folic acid, and other micro nutrients. These people are found on all continents. Then another 1 billion, especially in North America and Europe, suffer from a new type of food security problem - over consumption. So all in all, about half of the world's population is affected by food security issues.

The take-home message from the workshop was four fold:

(All lectures from the conference ware on line on YouTube.)
No comments: 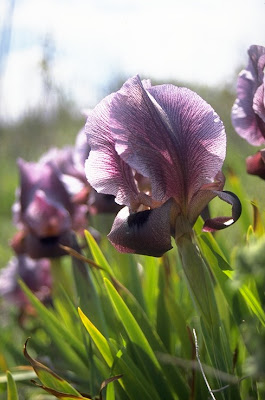 Royal Irises are among the most prominent flowers to bloom in the Israeli Spring. This group of species includes the largest flowers in the Middle East, with some as large as Mike Tyson's boxing gloves. Not only large, these flowers are oddly dark-colored. For example, the Gilboa Iris (Iris haynei [picture]) is purple, and other species can be as dark as black. How did this conspicuous dark color evolve?

These huge flowers double as SROs (single room occupancy units) for solitary male bees that sleep overnight in the flowers. These poor males are not allowed in the safe borrows of the females, who nest in the ground. Instead, they are banished for the night to look for a safe refuge from their predators. Iris flowers provide the perfect hospice. Following sunrise, rays from the morning sun heat the dark-colored flowers.  The inside of the flower quickly heats up, and with it, the resident sleeping bee. The warmed-up bee can then start its daily activities earlier than colder bees which slept outside. On its way out of the Iris, the bee picks up some pollen, which it carries around with him in its search for food (nectar) and sex (female bees). 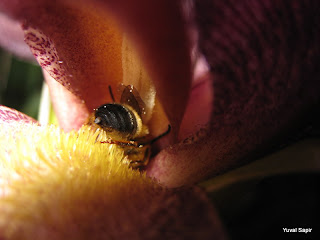 The following evening, tired from his day and still carrying the Iris pollen, the male remembers to go back to his safe and warm Iris-shelter. Upon entering the flower, the pollen-carrying male brushes against the flower's stigma, pollinating the flower.

So here we have the answer to the evolution of the dark-colored irises - the dark color was selected for by the pollinators who preferred a night shelter that promise them a warm place to wake-up in.
2 comments:

The grain of civilization

Emmer wheat was first cultivated at least 10,000 years ago in the area of the Fertile Crescent, and enabled the establishment of the first agricultural communities. While emmer grains have been found in numerous archaeological sites, it was discovered still growing in the wild in Israel in 1906. Subsequent studies have shown that this wild wheat is the progenitor of modern cultivated wheat, and is thus a great resource for breeding heartier strains.
4 comments: