No sibling rivalry for Petunias

Petunias grown in a nursery together with their sibling petunias thrived much better post-separation than did a single petunia grown on its own. This conclusion jives with numerous studies which show that puppies kept with their litter-mates for at least 8 weeks develop better than puppies separated from their siblings soon after birth, and also fits with accumulating evidence showing the importance to human development of keeping a baby in physical contact with people, rather than isolating a baby in a crib.


Seeds of Petunia hybrida were germinated in two different environments. In the green house termed “Petunia Patch”, the seeds were sown 5 cm from each other.

In the second green house termed “Onion Patch”, individual petunias were planted at least 50 m from each other. 5, 10, 20 and 45 days post-germination, individual plants from the Petunia Patch were transplanted to the Onion Patch. Control plants remained in each plot from germination until the end of the experiment. Each plot received the same watering and fertilizer regimen. Growth parameters (germination rate, height, leaf number, flowering time, flower diameter, seed set) were gathered daily over a two-month period. 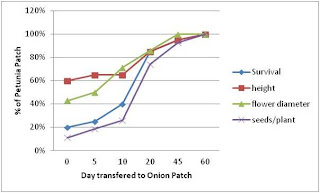 The results were astounding. The longer the petunia stayed in the Petunia Patch, the more the individual plants thrived (see graph on left). The effect was especially significant for the first 10 days. Most of the petunias germinated in the Onion Patch, or transplanted early in life, failed to thrive. When asked to comment on the flowers that didn’t bloom, Drs. John N.Kamano, William E. Faber and Maurice Merl  said, “They were just lonely little petunias in an onion patch”.

These results have implications for home gardeners who are asked to purchase neighboring petunias in their local nursery so as to lessen the separation stress of plants upon leaving the nursery.
No comments: