What would life be like without the opium poppy? No poppy seed bagels. No beautiful poppy flowers. No Dorothy falling asleep in the poppy fields in the Wizard of Oz. No morphine or codeine. The use of poppy as a pain killer is probably it's claim to fame and, when misused as in heroin, to infamy. The medicinal uses of opium poppy have been known for thousands of years. Turkey, India and surprisingly Australia, provide most of the worlds legal opium poppy. I once saw some opium poppy growing in a road divider on the way to Hadassah Hospital. Obviously it was planted for convenient use in the hospital, and not for any illicit uses.
2 comments:

The giant sequoia is the largest single organism in the world. While colonies of coral or stands of Aspen trees (that have a common root system) could be considered larger, no singular organism bests the might sequoia. The largest sequia on record was longer than a football field (almost 311 feet), and was over 56 feet in diameter. The bark surrounding a giant sequoia can be up to 3 feet thick.  For such a huge tree, its roots are surprisingly shallow, boring down only about 13 feet into the ground. But they do spread out wide: roots from on tree can fill an acre of land. These roots have to suck up huge amounts of water as sequoia trees transpire (a tree version of sweating) over 500 gallons of water a day.
No comments:

Could a team of Russian scientists have resurrected a 32,000 year old plant? According to a new report in the Proceedings of the National Academy of Sciences, these scientists found seeds in an ancient squirrel burrow that had been buried in the Siberian permafrost and kept for the past 30,000 or so years at a cozy -7 degrees Celsius (~-19 Fahrenheit). While thes seeds couldn't germinate, the scientists succeeded in isolating a very few viable cells from the seeds. Plants you see have the amazing ability to regenerate an entire plant from a single cell. So from a single ancient cell isolated in the lab, the Russians regenerated a living fossil that looks surprisingly like a modern narrow-leafed campion, except for its flowers, whose petals were narrower and had a slightly different pattern. The findings still need to be confirmed by molecular genetic methods, as contamination is always a problem in studies like these. But if true, this is an amazing opportunity to study plant evolution. You can read more about the finding in the New York Times or in Ed Yong's blog.
No comments:

If you drink two cups of coffee a day, then somewhere in the world there are 15 coffee trees growing just to supply your annual fix! The Arabica coffee tree originated in Ethiopia, but was spread throughout east Africa and the Arabian peninsula. Its now cultivated all over the world as Arabian coffee is often considered higher quality than coffee from other species of the tree. An old Ethiopian legend has it that coffee was discovered after the locals noticed that goats tended to mount each other rather vigorously after eating the leaves and fruits of the coffee tree!

Tovar Cerulli is an author and reformed vegan-turned-hunter. His book The Mindful Carnivore: A Vegetarian's Hunt for Sustenance was just released.


Blueberries were my first wild food, and have remained my most constant.


As a boy, growing up here in New England, I sought them in the pine and oak woods around my father’s house. Small, sweet, and dusty blue, they hung in clusters, concealed by the leaves of the ground-hugging bushes. With a quart container filled, I would head back to the house, where my father mixed them into pancake batter, dropped by the ladleful onto a sizzling griddle.

In my twenties, as a vegan, I continued to pick them and savor the fullness of their taste.

Even today—when the wild foods in our kitchen include everything from white-tailed deer and fiddleheads to chanterelles and indigo milk caps—there is something special about stumbling onto a patch of blueberry bushes.

Heavy with fruit, they might cling to crevices in the rocky hillside my wife and I have been hiking. On a warm summer day, the berries come as unexpected gifts: morsels of transmuted earth, sun, and soil. I dig a plastic bag out of my pack and we start picking and snacking. Half an hour and two quarts later, we’ve hardly made a dent.

Walking away, we talk about what we’ll make with them. Yes, I’ll make some pancakes. Yes, Cath will make a batch of jam. Assuming enough berries make it back to the kitchen.

Danny: Blueberries are native to North America. They are often confused with the European bilberries, which while similar in appearance and taste, are a different species. While blueberries are obviously essential for muffins and pancakes, a recent study has indicated that daily blueberry consumption can improve memory functioning, at least in older adults with impaired memory.
1 comment:

Mollie Cox Bryan is an author, scrap-booker, blogger and childhood friend. The first book in her new mystery series, A SCRAPBOOK OF SECRETS, was just published.
Are Morning Glories sneaky? I confess that sometimes I really think certain plants and flowers have a personality. I love the flowers—the vibrant colors, the way they open in the morning and then fold during the day. Part of the joy I take in them is that they are little survivors and opportunists, popping up everywhere in my backyard—which is exactly what my husband hates about them. Where I see a charm, he sees the need for order. Oh well. But the little sneaky, beautiful flower has found its way into my first novel—SCRAPBOOK OF SECRETS: A CUMBERLAND CREEK MYSTERY. The copy editor asked why so many Morning Glories. (Perhaps copy editors and orderly husbands have something in common?) I responded that I live in Virginia, my book is set in Virginia, and I love the flower. She didn’t press the issue—so my Morning Glories are safe, at least in my novel.

Danny: There are hundreds of different varieties of Morning Glories. One Japanese variety, Shidare-asagao, is particularly interesting for scientists because it has lost its balance. Plants, like people, have a sense of balance that allows them to know up from down. Just as we know when we're upside down, or just lying down, a plant also knows when its not vertical. Plants shift their growth according to gravity. That's why plant shoots always grow up, and roots always grow down (you can test this at home by placing a plant and its pot on its side). Shidare-asagao though has lost its sense of gravity. Rather than growing up, its shoots fall down. This makes for a great hanging plant.
No comments: 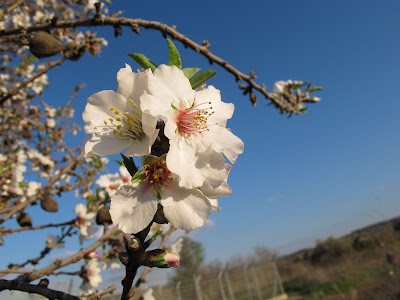 Almond trees bloom in the midst of winter, exposed to rain and wind. This is also the same time of the year that has an almost complete lack of pollinators. So how do these trees make fruits?

Well, on rare sunny winter days, these trees are visited by large solitary Anthophora bees. Each bee can visit a single tree hundreds of times. But even with these visits of pollinators, only a tiny fraction (5 - 10%) of flowers set fruit, which seems like a huge waste of flowers. Why such a waste?

The answer is probably due to the difference between males and females (I'm talking about trees here, but the case could be made for humans as well). Males seek different paths of reproductive success than females. The male parts of the almond trees (which produce the pollen) benefit from each bee visit as more and more pollen is spread to other trees. The huge number of flowers is a very attractive advertisement for the bees to come get pollen. The larger the advertisement, the better chances of male success. The large cover of thousands flowers attracts many more bees that carry pollen away, which increases the chances of male success.


The female parts of the tree (which is the style and ovules), on the other hand, enjoys the privilege of "choosing" the best pollen grains and being picky. Only the most fit male will make it to the ovule and produce a fruit, otherwise an abortion will be its fate. So only a twentieth of flowers set fruits, but these will be the best kids for mom!
1 comment:

The tree of God's House


This tall and strong conifer is the the national emblem of Lebanon and found throughout the mountains of Lebanon and northern Israel. The`cedar is mentioned through out the bible, such as in Psalm 92:12 - The righteous ... shall grow mighty like the cedar of Lebanon. King Solomon was so impressed with the beauty and strength of cedar wood that he imported huge amounts of cedars from the Phoenicians in Tyre to build the First Temple.

The wood in a tree trunk is actually old water vessels called xylem. Each year a tree makes new xylem tubes on the perimeter of the trunk, while the old ones are plugged up and serve to support the tree.